Judge tears into Northampton Council’s Samantha Ling and her department

In a shocking, and embarrassing for Northampton Borough Council (NBC),  determination by Judge Wayte of the First Tier Tribunal property, he went so far as to suggest that the landlord should make a claim for costs against the Council.  A move that is almost unheard of, such was his condemnation of Samantha Ling and her department. 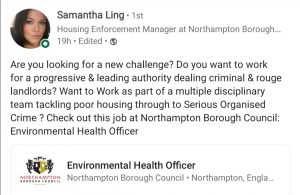 Ling’s department is well known as priding itself in being one of the most aggressive housing enforcement departments in the country.

Ling herself has a well-earned reputation for being a uber-tough enforcer and even our professionals, as landlords’ representative, have been screamed and shouted at by her as though we were mere peasants and she the overlord.  One of the country’s top housing Barristers described her to us as “that awful woman”.

In this recent Tribunal case the NBC SWOT team had conducted a raid on a house in Northampton which they believed to be an unlicensed HMO.  (They like unlicensed HMOs because they can extract massive revenue from the landlord in civil penalty fees.)

In this case the house was found to have eight persons there at the time of the raid.  I call it a raid because it is this particular enforcer’s modus operandi to have a team of 6-8 people to turn up to a typical terraced house waving warrants for forced entry.  One is put in mind of the drugs raids one sees on TV, or for readers old enough to remember, Jack Reagan in The Sweeney.

Rubbing their hands at the massive contribution to the Council’s revenue targets they were about to make her department immediately issued six  Fixed Penalty Notices (FPN) totalling £24,800.

The landlord’s agent immediately responded that they do not let HMO’s and gave the Council a copy of the single AST under which the property was let to a man and confirmed that the same man was registered for Council Tax as the tenant.

It seems to have been very evident that this was a classic case of the tenant having sub-let unbeknown to the letting agent or the landlord.

But Ling and her team weren’t about to let a simple fact like that get in the way of their revenue goals, or their mantra that “all landlords are criminals and rogue landlords”.

Forcing the agent’s representative to attend recorded Police And Criminal Evidence Interviews (also just like you see on the TV police dramas) the agent repeated, time and time again, that their company does not let HMOs and that the property had been let on a single-let AST as a family dwelling.

Now, what really excites these uncontrolled revenue generation officers is that when this situation occurs – when a single-let property gets turned into an HMO by the tenants – then they automatically get to issue not just one financial penalty for not having an HMO licence, but they can literally throw the book (the HMO Management Regulations 2006 book, that is) at the manager with another five financial penalties for the property not meeting the HMO management regulations.

Now it’s pretty obvious that, since the landlord/agent didn’t let the house as an HMO, it would be extremely unlikely to have all the extra fire alarms, fire doors, door closers, emergency lights, extra sinks, cookers and bathrooms in the right numbers for all the occupants that the landlord and agent had no idea were possibly living there.

Even Northampton council’s own paralegal told Ling’s team that there was insufficient evidence to substantiate the alleged management regulations offences.

On receipt of the Civil Penalty Fines, the agent made formal legal ‘representations’.  Ling’s response was to send a templated letter which didn’t even acknowledge the legal representations made, let alone respond to them, instead fobbing them off with: “The Council has concluded its review including any representations you MAY have made…”. Of course their conclusion was to continue the case.

Now, as head of department, Ling knows only too well, not having an HMO licence is a strict liability offence  – just like speeding.  There is, however, what the law calls a “reasonable excuse” if the landlord or manager can establish on the balance of probabilities that they were not knowingly operating an HMO.  (which of course was what the ignores legal representation said). A situation which Judge Wayte thought was patently obvious, and said so in his judgement!

Of course, if Ling’s team had accepted that fact, they wouldn’t be able to claim the trophy (which they normally spread all over social media and issue press releases – such is their glee).  Nor would they be able to collect their £25,000 financial bounty.

Overturning ALL of the financial penalties and ALL accusations of wrongdoing against the landlord/agent Judge Wayte said of Northampton Borough Council’s enforcement team under Samantha Ling’s leadership:

“The Council’s Private Sector Housing Policy 202 states that all the Private Sector Teams’ enforcement activity will be targeted, proportionate, fair and objective, transparent, consistent and accountable.

“Miss Ling and her team have not met the principles in this case.” These are extremely harsh words from a Judge in his determination.

Judge Wayte continued, “The responses to the Representations are a particularly poor example of entirely the opposite approach.

Judge Wayte concluded that, “Mr X (the manager) is owed an apology.” (by Ling and Northampton council).

But the Judge was not yet finished in his admonishment of NBC and Ling’s disgraceful department, continuing in his admonishment to say that “As a result of this failure, the applicant (agent) has been put to considerable expense in preparing his appeal.  He may wish to make a claim for costs.”

Such a suggestion is very rare because in the Tribunal costs are rarely awarded unless they are incurred due to “unreasonable conduct” by the other side.  In making this strong suggestion it is very clear that the Judge considered NBC and specifically Samantha Ling and her henchmen was highly “unreasonable”.

And although the Judge cannot make an award of costs until after the agent makes a claim, he immediately told the Council to pay back the agents £800 of tribunal applications fees as a final slap to Ling and NDC.

Nor is this behaviour a one off.

In another case in which this firm was involved Ling’s team was quite happy to leave tenants in mortal danger and instead of using their powers under Part 1 of the Housing Act 2004 to close down the HMO or undertake the urgent safety works (and we are talking dangerous fire prevention measure that would have resulted in death had there been a fire).

Instead, they went through the same drugs-style-raid with eight officers followed by the issuance of £114,000 in civil penalty fines – albeit that the Tribunal found that only £55,000 was justified.

The council then tried to declare the replacement HMO manager – who had been brought in under our guidance – and who was the person who had already made the HMO into a fantastic home for the happy tenants – ‘Not Fit and Proper’, simply because she was related to the owner and without in any way checking out her bona fides.

Thankfully Landlord Licensing & Defence won that case for the new manager, but we had to fight.

Sadly, Ling is not alone.  These Rogue Council Enforcement Officers are springing up all over the country as councils realise that (because they get to keep the  monies from as many fines as they can issue) licensing and fining landlords is a massive cash-cow that they pursue against the interest of both tenants and landlords.

The last word goes to a very senior housing officer of the old school, who was approached by Ling through a head-hunter.  After a telephone interview he told this writer:  ”I am shocked;  I cannot believe how many times in 20 minutes Samantha Ling referred to landlords as criminal and rogue.

“She obviously considers that all landlords are criminals and rogues”.

You can read the full judgment here

Keep up with the latest from Landlord Licensing & Defence…

Subscribe to our YouTube Channel to find all our videos on Regulations, RRO, HMOs and much more! → https://www.youtube.com/channel/UCr1wNum9AR7kgFL9Kf0LT-Q

Join our private Facebook Group where you’ll find a support network of other landlords and experts as well as case studies and how to avoid council fines. → https://www.facebook.com/groups/1774212136183898

Subscribe to receiveall the latest updates on regulation and legislation

You have Successfully Subscribed!